‘The Apprentice: ONE Championship Edition’ ep4 ends with Surprise Double-Elimination

“The Apprentice: ONE Championship Edition” returned with another thrilling episode on Monday, 12 April.

In the boardroom, ONE Championship Chairman and CEO Chatri Sityodtong, and his Advisor, Niharika Singh, made a tough decision to cut two more candidates from the show. 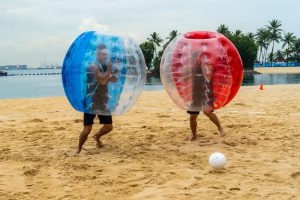 Teams headed to Tanjong Beach in Sentosa to play a game of bubble soccer. Upon arrival, they were treated to a flashy display of Northcutt’s karate skills.

Because Team Conquest had one extra player, the group decided Nazee Sajedi would sit out.

Niraj Puran Rao, who played soccer professionally in India, devised a strategy for Team Conquest, which involved Eugene Chung clearing a path for him to score. On Team Valor, Irina Chadsey hounded Puran Rao across the field and was effective with her lockdown defense.

While both teams struggled to push the ball across the line, an unsung hero emerged. Joy Koh, who had never played soccer in her life, scored the only goal of the game, winning the challenge for Team Conquest.

Before the challenge began, Sityodtong had Chung and Clinton Tudor switch teams.

Team Valor came up with their brand, “Seoul Food,” which combined Korean flavors with Southern cuisine. Their first dish, “The Breakfast Cluck,” consisted of fried TiNDLE over a potato pancake. Their second dish, “Super Pulled Chick,” featured a pulled TiNDLE barbecue sandwich with sweet potato fries. The pitch was led by Teirra Kamolvattanavith and Louie Sangalang. 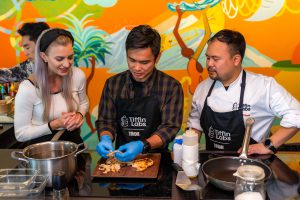 The special guest in the boardroom for this episode was Kishin RK, the CEO of RB Capital and the Chairman of TiffinLabs. At 37 years old, Kishin is Singapore’s youngest billionaire.

Team Valor presented their digital restaurant first, impressing the judges with a solid brand concept. However, the packaging of their product underwhelmed, and Siyodtong pointed out that it did not justify the asking price.

Team Conquest, on the other hand, presented a solid product, and Sityodtong complimented their attention to detail. The product offered premium packaging and featured a much more cohesive concept. But Sityodtong wasn’t impressed with the brand and thought it felt like cheap fast food.

With emotions running high, Team Conquest’s Sajide and Koh blasted their Project Manager, Kexin Ye, for leaving the pitch deck to them at the last minute. Jessica Ramella complained that no one on the team wanted anything to do with the pitch deck, so she had picked up the slack.

Despite that dysfunction, Sityodtong felt Team Conquest won the challenge with a superior product and pitch.

Chadsey, who was Project Manager for Team Valor, brought Kamolvattanavith and Sho Takei with her to the chopping block. After she told a moving story about her grandmother, the judges made their final decision. Sityodtong believed Kamolvattanavith and Takei were in the competition for the wrong reasons, and they were both eliminated from the show.

More information on “The Apprentice: ONE Championship Edition” and How to Watch can be found at https://www.onefc.com/the-apprentice

The How’s and Why’s of owning a gun