My dream fulfilled with the gospel album, Be Still by Maria Chew

My dream of becoming a singer dates back to my elementary days. I can still remember the time when I auditioned to join an annual singing contest at school but ended up in the declamation contest instead. ‘But, but, I want to sing!’ I was shouting inside but kept silent outside. My teacher said I’d be better off in that area. Oh well, you guessed it right, I did not win. Good thing is, we won in the singing contest – its just not me representing our batch, sigh.

That episode didn’t stop me from dreaming that one day, I will become a recording artist.

When I was in High School, I really wanted to be part of our batch’s “Maria” the musical play. But as fate would have it, I didn’t make it also. Not even a small part. Sigh, again. But did you think that would make me forget about my dream? Na-ah! (Lakas ng fighting spirit!)

College was on the serious side. Taking up Dentistry at Centro Escolar University, Manila, all I did was study. With singing only as part of the village church choir. After six years in college though, I enrolled with Mr. Butch Albarracin’s Center for Pop Music in Cubao, to further hone my craft.

Then I went to Yamaha School of Music as a School Registrar. And that’ s where I met my friend and bandmate, Maria ‘Nenette’ Gil-Chew. We did gigs in and out of town and auditioned for out of the country stints too. Oh yes the band did go out but, without me. Sigh again! Why is that so? Well that’s another story but I believe it all happened for a good reason.

Anyway, Nette and I parted ways and never heard from each other again for quite a long time. Until technology has given rise to Facebook and found a message coming from her to meet and catch up. Fast forward, I became part of doTERRA Ph with her and hubby Bryan Chew. On the side, we talked about her dream of doing a gospel album with me singing the cover. Wow, just wow! I made it! Who would have thought that at my age, (never mind, lets not mention it here, haha!) I will be able to record songs and fulfill my dream?

It’s surreal seeing my name as a singer on the album. All glory and praise to God!

Mommshies, below is Be Still’s story. I am grateful and honored to be part of this album. The most important lesson of this story – keep dreaming because dreams do come true!

Be Still is a praise album created by Maria Chew along with some of her closest friends. It differs from other praise albums in the sense that each song has its own story to tell and is aged through time.

The sound of each song is an expression of how unique God’s creativity flows through every individual. Some chords are unpredictable, some will surprise you, and the creators mostly used 7th & 9 chords in their music. Paired with the unique arrangements by Eric Pablo, this resulted in ensuring that every song is a different experience.

Creating this album for Maria has been a lifelong dream but as with anything worth doing, there were hardships and challenges, the main one being that of scheduling. In God’s perfect time, despite the fact that the creator, singers, and arranger live in different countries, things started to fall into place and in one day, the singers, the recording studio, the sound engineer and everyone’s schedule all matched.

The singer for “Be Still” which is the song cover is yours truly. As mentioned above, Maria and I used to be bandmates but lost track of each other and reunited with the help of Facebook. Maria says I was her perfect choice because of my strong solid mature voice, especially when reaching high notes. In the album I sing 3 more songs: “Fullness of Joy,” “Wonderful Savior”, and “Lord of My Life”.

Faith Purificacion sings “Touch My Heart” which is a creation of Pastor Eric as well as “He Restores My Soul” which is a collaboration between Maria and her eldest daughter.

The only male singer in this album is Zaldy Reblora. He is from the music ministry of the church that Maria used to attend to and his voice is perfect for duets as well as “I Pray in Jesus’ Name” which is a song that was composed 20 years ago.

“Be Still,” is very applicable in today’s predicament, and in any situation people may have. When we are stressed, when we have no peace, when we don’t know what to do, just be still, and seek God. He will give us peace that passes all understanding. Trust in Him because He cares for you. And even when we are happy, be still and meditate on the goodness of God in your life.

This is why the song was chosen. In this day and age where everyone is in a hurry to post, like, share, comment, and just get on with things, it is important to remember that we need to be still and stay still. This is the only way we can communicate with God and hear His message for us. Be still.

Listen to the song “Be Still” through SoundCloud, You Tube, Amazon Music, Apple Music/iTunes, Spotify, and also on other digital stores worldwide.

To listen to the song, click the link here:

And here’s another track for your listening pleasure: 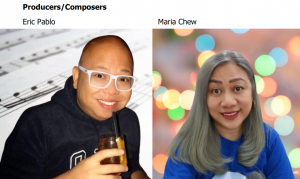 When Covid 19 hits home: Our longest 14 days on lockdown