LOUIE Sangalang’s voice was hardly heard in Episode 5 of The Apprentice: ONE Championship Edition.

But his supposed passiveness for Team Valor in the business challenge shouldn’t be looked at as a shortcoming on his part.

After all, Sangalang did his best in the role given to him — one which kept him in the thick of the fight in this high-stakes game of business competitions and physical challenges — all for the prize of a US$250,000 job offer to work as ONE Championship chairman and CEO Chatri Sityodtong’s protégé at the ONE Championship Global Headquarters in Singapore for a year.

Because you’re not seen, you’re at the backend, there’s a tendency for people to disregard your contributions,” Sangalang testified inside the Boardroom.

It may not be that evident right from the start, but Sangalang’s presence was truly underrated for Team Valor’s success.

From the dragon boat challenge, the 43-year-old procurement consultant gave it his all despite the apparent fatigue that led teammate Eugene Chung to stop paddling, leaving it to Sangalang, Monica Millington, and Irina Chadsey to compete with the heftier Team Conquest.

Given those circumstances, it’s understandable that Team Valor, which had ONE Heavyweight World Champion Brandon “The Truth” Vera on its side, lost the challenge and was pressured to redeem themselves in the business task.

Like any good follower, Sangalang was a handy tool for Team Valor in the ensuing task while also allowing the leaders to excel in their jobs. 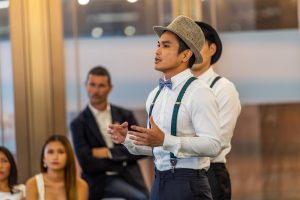 He and Chung did a good job gathering crucial information and inspirations for their pitch and conveyed those ideas to the tea leaders.

The collaborative work allowed Team Valor to shine as they tried to create a fusion product out of The Shirt Bar and Bengawan Solo, retailer brands from Changi Airport.

The result was Esensi, a line of scented candles inspired by the five distinct flavors from Begawan Solo restaurant and customer-made designs from The Shirt Bar. Sityodtong called the product “outstanding” and lauded Team Valor for “an outstanding job.” The packaging, Sityodtong added, was a “complete disaster” though.

Valor project manager Millington took responsibility for the oversight, and when asked by Chatri who she would take with her to the Boardroom if, theoretically, they lost the challenge, she mentioned Chung and Sangalang.

Lucky for Team Valor, they won the product challenge task and avoided the chopping block. 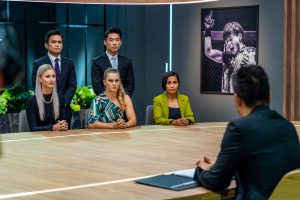 It’s now up to Sangalang to prove how hungry he is to win it all and get the once-in-a-lifetime chance to become Sityodtong’s chief of staff.