After winning The Apprentice: One Championship Edition, what’s next for Jessica?

In the end, there can only be one. And in the recently concluded The Apprentice: ONE Championship Edition, that One was a 31-year old sales director from Venezuela, Jessica Ramella.

Ramella edged out Filipino fellow finalist Louie Sangalang in the exhilarating finale episode where the ultimate fate of the two contenders was determined by their performance in a tough interview conducted by ONE Championship Founder, Chairman and CEO Chatri Sityodtong and Grab Founder and CEO Anthony Tan.

The results of the interview coupled with an overall assessment of both contenders’ character, skills, motivation, and relatability tipped the scales in favor of the Venezuelan. Sityodtong noted her wide range of skills and her grace and dignity in the face of adversity as qualities that would carry her through her new job’s challenges.

Sityodtong praised Louie for his integrity and ability to lead with calm judgment, however. But he saw the girl called Lady MacGyver, for her prowess in problem-solving, as the more relatable between the two.

“Jessica has a very high IQ, very high EQ, a high Ph.D. – poor, hungry, and determined – factor. She has a lot of fire in her belly to do something very big in her life, just like everyone else in ONE. That’s something I recognized very quickly. She has the creativity, she has the people skills, she has a natural leadership ability as well. She’s a very well-balanced leader who has truly world-class potential,” Sityodtong said. 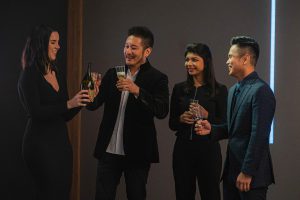 Now the hard work begins for the winner of the ultimate prize of a US$ 250,000 job offer and the chance to be Sityodtong’s protégé and chief of staff in the ONE organization, Asia’s largest global sports media property.

“The Chief of Staff has to juggle multiple projects and the most important priorities of the company. So Jessica has to be my shadow in terms that if I can’t attend a meeting, she will attend the meeting for me. Jessica has to be a mini-me,” he said.

Also, she will have to prove herself worthy every single day and show that she was the right choice, Sityodtong added. He will be with her every step of the way through, he said, as they aim to take ONE Championship to new heights.

“The path to greatness always involves passion, dreams, and purpose. But it also involves sacrifice and suffering for those dreams, purpose, and passion. It’s one thing to do it for eight weeks, or 10 weeks, or 13 weeks on the show. But it’s another thing to do it every day of your life,” Sityodtong explained.

The ONE CEO minced no words in describing the challenges up ahead for his new protégé and chief of staff. “In the quest to unleash your greatness, in the quest to push our mission of unleashing real-life superheroes, time will tell, as time always does. Time will tell us everything about whether Jessica really wants to unleash her greatness in life or not. This was the toughest ‘Apprentice’ in history and this will be the toughest job she’s ever had. I am definitely going to be the toughest boss she’s ever had in terms of standards of excellence, detail, orientation, my expectations, analytical thinking – everything,” Sityodtong concluded.

The Apprentice: ONE Championship Edition’s premiere in March was the most-watched English-language reality series premiere of 2021 so far. The Philippines’ premiere on AXN exceeded the timeslot average on the cable network by 60%, beating the Season 32 premiere of all-time favorite The Amazing Race.

DLSU lights up its Christmas Tree to welcome the season